Many years ago, The Game Creators (who, at the time, were mainly known for DarkBASIC and DarkBASIC Professional) ran a competition in partnership with Alienware. The rules were simple: Create a DarkBASIC game featuring the provided alien.3ds character model, and display the "Play it on Alienware" logo at some point. The winner would be rewarded with a free Alienware gaming PC.

I didn't enter this competition, but I did download several of the entries to see what they were like. This was in early 2004, so I would have been about 17 years old, playing them on my old Toshiba laptop running Windows XP.

I recently decided to download some of these games again. However, the website has been redesigned several times over the last decade, making them rather difficult to find. Thankfully, some digging around on archive.org led me to what I was looking for, so here are three of the games that I have re-discovered 14 years later: 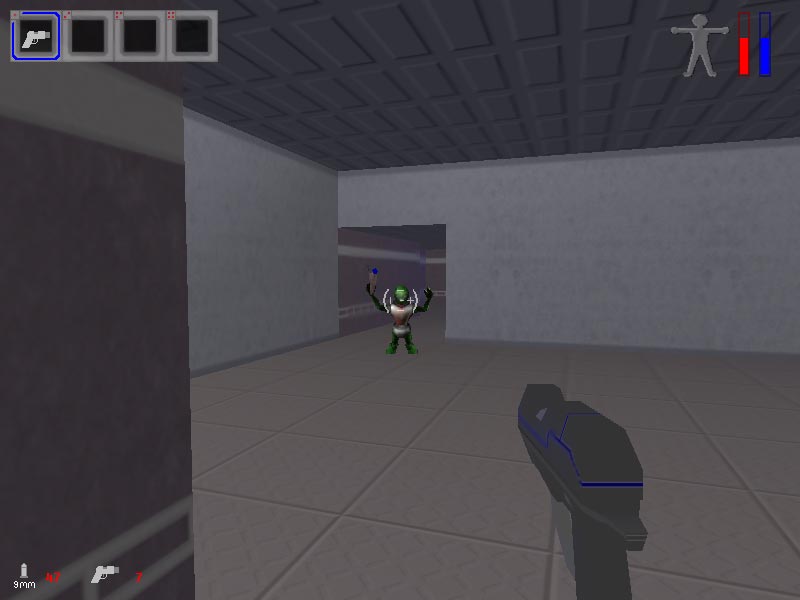 Star Thing was a neat little FPS in which you had to find passcodes for doors by reading notes scattered about the levels. You could only carry 4 items at a time (guns, health kits, and armour kits), so you had to carefully decide which things you took with you when travelling to the next level.

It makes me think of System Shock II or Deus Ex, and I played through several times back in 2004. It worked just fine on Windows 7 when I tried it out today, so I made Matt play though it.

Another cool little FPS, this one actually made it into the top 10 of the competition results.

I couldn't get this one working under Windows 7 (it complained about a missing D3D-related DLL file), but there are quite a few videos of it on Youtube: one, two, three, four.

Okay, so this one is a bit ropey compared to the other two, but that doesn't change the fact that I played it back in 2004. Plus, it's got a wonderfully DarkBASIC-ey feel to it!

I haven't tried running this under a more-modern version of Windows yet, so I have no idea if it will work. I suppose I could always dig out my ancient Windows XP laptop, since I do still have it in a cupboard somewhere...

Note that quite a few of the download links on the archive.org version of the page won't work, but this is easy enough to fix:

This has been a public service announcement by the society of concerned citizens for DarkBASIC history preservation. Now, go and try out some of the other competition entries! I implemented file-uploading yesterday evening, so now we can add images and stuff.

I'll be making everything available on my GitLab page once the code is a bit more polished; the public-facing pages look OK right now, but the behind-the-scenes stuff is pretty awful. In addition, I set up RSpec, simplecov, and FactoryBot this morning, so hopefully any further code changes will be a less likely to break things...

A few days later, and we now have the ability to post articles, plus a nice new CSS theme!

One cool feature is that code blocks are automatically syntax-highlighted:

This is done via highlight.js, something I came across a few years ago whilst writing Markdown-based documentation at CDL. I had to write some custom JS to account for Turbolinks events, but other than that it was pretty straightforward to set up.

(The font used is called VT323, and you can find it on Google Fonts.)